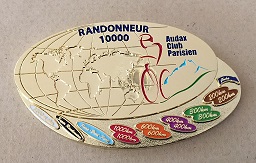 Fifty years after the creation of the RANDONNEUR 5000 award, the Audax Club Parisien created the Randonneur 10000 award to recognize finishing ACP and Randonneurs Mondiaux events totaling at least 10000km within a six-year period. To qualify for this award, the randonneur must complete:

* The ACP has expressed that a Super Randonnée 600 permanent, ridden in the Randonneur division and homologated by 10/31/2022, can be used either in lieu of the 600k with 8000m of climbing, or as supplementary distance to reach 10000 km.

Some additional French events can also be used as qualifying rides.

The qualifying events must be completed within a six-year period, beginning on the date of the first qualifying event, except that the ACP has extended the deadline two years for those who are counting PBP'19 towards the award.

Applications must include the homologation numbers for each qualifying ride. If you are depending on a late-season event to complete your award qualification and result processing by ACP or RM is delayed, your application may need to be held over until the following year.

The Randonneur 10000 award is an ACP award. RUSA acts as intermediary for handling applications.

RUSA extends its congratulations to the US riders who have received this special award.