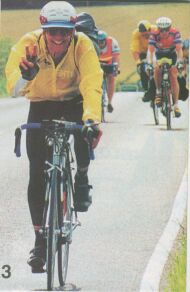 This rider chose the Harlow start for its proximity to London's Stansted Airport which is a mere 20 minutes away. Furthermore, for the American cyclist, three men associated with early American history lived at or near Harlow: 1) Roger Williams, the pioneer of religious freedom who founded Providence, Rhode Island, after being banished from Massachusetts; 2) John Lake, the philosopher whose beliefs in life, liberty and property were adopted by Thomas Jefferson into our Declaration of Independence; and 3) John Norton, the chief persecutor of the Quakers in Massachusetts. Harlow does have some historical appeal to the American cyclist as the preferred start location. The 10 am start from Harlow was fast paced due to the fact the initial 300 KM was flat farmland and pastureland with occasional floral garden scenery. The highlight of this segment was passing the Greenwich Meridian Memorial at 51 KM outbound. My average speed was 27 KM/H for the first day of 300 KM which concluded at Thorne about 11 pm.

The second day began just before sunrise at 4 am. Initially the course was flat fenland until Bossall, then the Howardian Hills appeared as we approached Castle Howard. There was a marked change in terrain from this point outbound. Hovingham was the breakfast stop, and Hovingham Town Hall, designed and built by Thomas Worsley in 1760, occupied a central position in this village of sturdy stone cottages with flower gardens. The next 100 KM were rolling hills, much like the rollers encountered doing BMB from Newton to Bullard's Farm. While cycling through the village of High Force within the Teesdale region, we passed England's largest waterfall.

The 10 KM climb up the Yad Moss Summit marked a significant terrain change again on the course at 506 KM outbound. We had now entered the Pennine moorlands. The elevation change put the rider on roads just below 2000 feet above sea level with surrounding peaks 2200 ­ 2450 feet above sea level. To be specific, this area is know as the Northern Pennines Area Of Outstanding Natural Beauty ­ quite pleasing to this Sierra Club member.

After the descent into Alston's cobblestone streets, it was not until the town of Brampton at 561 KM outbound where the pack of riders, who had started from Thorne, passed us on their route south to London. This segment was a section of long, up­and­down rollers following the terrain of a ridge. When I cycled this segment the next day headed south, it became a "deja vu" of Colorado's Hardscrabble Pass Century ride, especially the climb from the Arkansas River Basin known as Royal Gorge to the town of Westcliffe. That is what this segment reminded me from my memory of American rides. Nevertheless, my second day concluded with an early evening climb into the Eskdalemuir Forest, ascending about 1088 feet to the Samye Ling Tibetan Centre. I arrived at Eskdalemuir about 11 pm completing another 300 KM day.

The third day began with a solo 3 am departure amidst flocks of sheep covering the road in darkness through the Eskdalemuir, Craik and Ettrick Forests. Five mini­passes or "five big­lumps in the road" led us through the Scottish Borders to what is called the Moorfoot Hills ­ the highest of these five climbs was about 1300 feet, however, the surrounding peaks were as high as 2450 feet above seal level. Although this segment was mentioned as being the potentially rainy area of the randonnée, I only experienced ten minutes of light shower activity. This Scottish Border area was probably the most beautiful and tranquil portion of the ride ­ evergreen forest patches on the hillsides, jagged and rounded peaks, and golf­course­putting­green texture grass in the valleys ­ it was very nice.

I arrived at Edinburgh, the midpoint at 712 KM, on the third day at about 7:15 am, and relaxed for about an hour. For the naturalists as well as cyclists, our control was less than 30 KM from the John Muir House and Country Park in Dunbar. John Muir was the great 19th century conservationist who was born in Scotland, and who established America's first national parks.

I left Edinburgh at about 8:15 am, and ironically the longest climb of the entire ride was the 17 KM ascent of approximately 1150 feet from downtown Edinburgh back to the Moorfoot Hills. I arrived back at the Langdon Beck control, which was at the base of the Yad Moss Summit at about 9 pm after another 300 KM day. Although it was still rather early, my cycling clothes were wet due to perspiration because of the extensive climbing inbound from Carlisle to Langdon Beck ~ the Hardscrabble deja vu segment. Therefore, I determined it prudent to dine, shower and dry my wet clothes because the night temperatures in this region were reported to be about 45 ­ 47 degrees Fahrenheit. Although, when I departed Langdon Beck, the atmosphere did not feel cold.

My fourth day began at 2 am with a solo night ride through Barnard Castle, a traditional market town in the rolling countryside of North Yorkshire. The afternoon of day four was probably the warmest as temperatures rose to mid 70 degrees Fahrenheit with strong sun. In fact, the weather was so fine for each day of cycling that LEL could be described as a bellweather event. As I departed Thorne, two South African riders from Capetown joined me for the segment from Thorne to Lincoln. We arrived at Lincoln at about 9 pm, dined together and shared a room for several hours at a local hotel. This stop concluded another 300 Km day. We decided to stop at Lincoln to rest because the other group that started the ride from Thorne and did the hilly, northern route first, was expected to converge en route back from London at the next control at Thurlby for sleep. We feared that we might not have sleeping space at Thurlby ­ our plan worked well to stay and sleep at Lincoln.

On the fifth day, I was ready for a 1 am start for a night ride through some of the most peaceful and classic English country lanes than can be found on earth. This segment was from Lincoln to Thurlby. The roads or country lanes as they are aptly called, can be described as similar to the country road network around the Brookfields of central Massachusetts. Lucky for me, I met two UK riders who were willing to join me for this segment ­ one rider was a London Transport employee ­ many thanks to London Transport for their assistance in the English countryside! There were few, if any road lines or street lights on this 75 KM night ride segment ­ we had to ride with great care.

When we arrived for breakfast at Thurlby, we met another UK rider and two Italian riders who wanted to arrive at the London finish at Harlow in under 100 hours. Thus we all completed the last 141 KM with a coffee bar break at St. Neots, and a light lunch at the final Longstowe control. Arrival at the finish was shortly after 1 pm, for a finish time slightly over 99 hours. All riders had slightly less than 118 hours to complete 1416 KM. This event was a ride and not a race in the spirit of Audax UK randonneuring. I am sure a good time was experienced by all.

LEL organizers Bernard Mawson and Rocco Richardson deserve praise for very good food and rest accommodations at the controls. Pasta dishes an other freshly prepared food were always available at the controls at very reasonable prices. The volunteers who staffed the controls were always helpful and courteous to all cyclists. Based on the information from the Audax UK event website, of the approximately 298 riders who attempted to complete the 1416 KM course, exactly 204 successfully completed the distance within the time allowed, or about 69% of entrants. Of the 14 American entrants, 10 successfully completed the 1416 KM course, 1 successfully completed the 800 KM course, and 3 other registered riders either did not start or did not finish either course. My average speed as appeared on my Avocet cyclometer was 22 KM/H based upon approximately 64 actual hours of riding for the 1416 KM distance, with approximately 35 hours of various forms of rest off the bicycle. A warm thank you to Audax UK for presenting the "Big One" Edinburgh­London 2001 to the long distance riders of the world. It was a privilege to ride it, and will forever be a long­lasting memory.