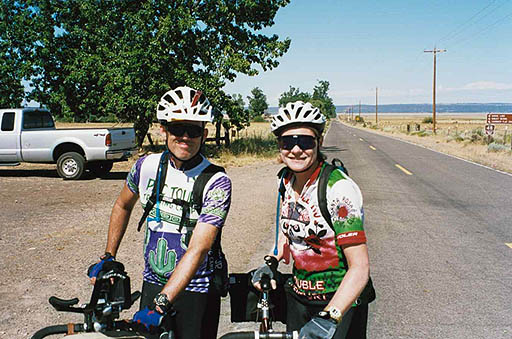 I decided to attempt the 2001 Gold Rush 1200K Randonnée, organized by the Davis Bike Club, because I wanted credit for a 1000K brevet, and there was an option to ride the Gold Rush as a 1000K brevet followed by a 200K brevet. In fact, you could even ride just the first 1000K of the Gold Rush, although that would leave you an inconvenient 200K shy of your starting point. Also, riding 1000K plus 200K within the time limits would qualify me for the same finisher's jersey that the regular 1200K riders would get.

Waiting at the start of the ride, however, this "just pick up the last requirement for my Randonneur 5000 medal" reasoning seemed foolish indeed. This was a ride as long as Paris- Brest-Paris, only with real mountains between me and the turnaround and the possibility of temperatures in the 90s or higher. In fact, it was already in the 90s. Maybe I should have worked harder to get heat acclimated? Maybe I should have lost some weight to climb faster (well, it worked for Lance)? Maybe I was in over my head?

As it turned out, the folks at the Davis Bike Club had outdone themselves in anticipating my worries. Yes, it was hot, but the ride started at 6 pm, and already it was cooler than it had been earlier in the afternoon. With a steady tailwind blowing from the Sacramento Delta, we shouldn't have to work very hard to cover the first 100 miles to Oroville. All I needed to do was stay cool and conserve my energy.

Right on time, 73 of us rolled out of Davis, and I immediately started conserving energy like crazy as the lead pack pulled away on the straight flat farm roads. No problem, I could still get to Oroville in six hours, after which the climbing would begin under cover of darkness. Our route followed a levee along the Sacramento River, with sunflowers lining the side -- just like France. Having ridden a fair amount in France, I know that Paris-Brest-Paris does not traverse the most scenic parts of that country, unless you're really into corn. The Gold Rush, on the other hand, proved to be an extraordinarily beautiful ride, from the orchards and fields of the Central Valley, to the tumbled granite boulders in the Feather River Canyon, to the summit of the Sierra Nevada mountains above Susanville, to the Plumas National Forest, to the high lonesome desert of Modoc County. On this ride, though, the scenery was painted in broader, bolder strokes than in rural France, which made it easier to keep the whole route in one's mind. For better or worse, I always felt I had a clearer idea of where I was in the grander scheme of 750 miles.

Starting the ride, I was worried because the second two hundred miles contain such a disproportionate amount of climbing. Two things saved me: judicious use of nighttime riding hours and the weather. I found that afternoon thunder showers could take the sting out of even the steepest, unshaded climb, and even when we encountered meteorological extremes such as hail or heavy rain, they never lasted long enough to seriously chill or impede us. Still, I was glad to be carrying arm and leg warmers as well as a jacket, and I wouldn't recommend that anyone get caught without them on this ride.

Riding past spreading reed-lined lakes, bereft of even a single jet-ski, or crossing long grassy valleys, the same thought kept going through my mind: How can a state that's so crowded have so much lovely, extravagantly empty space? The Gold Rush seemed to transport us back to a California that was all wilderness, where grizzly bears roamed the high country. Fortunately, the largest predator I saw was a badger.

Perhaps because of the extreme remoteness of the course, the Davis Bike Club organized the most incredible support I've ever seen. Volunteers actually outnumbered riders by two to one. Most of this effort was focused on the controls, where volunteers made sure you got what you needed almost without your having to tell them. But the frequent vehicle patrols were also welcome. This was a course where you could ride 100 miles without seeing even a service station.

Of course, no one was lining the road at two in the morning to offer "Bon courage!" but in the tiny town of Adin, which at 310 miles was the first resting place for most randonneurs, the local population was completely supportive. I heard that the locals even raided their home refrigerators for eggs when the kitchen at the control ran out.

Like most, I made it to Adin in time for a few hours of sleep. That left six (I counted) substantial climbs during the next day as we rode out to the turnaround at Davis Creek, back through Adin, and on to Susanville for a second night's all-too-brief rest. Then, on our third morning, we rode to the bottom of the notorious Janesville Grade, which some people had feared would prove virtually unrideable after 500 miles of "scenic" riding. Well, unrideable doesn't mean unwalkable, and I did see some people in funny clothes and helmets strolling up the steepest bits. With low enough gears, though, most of us were able to make it to the top with only a tiny bit of road weaving. From here, with only one relatively easy climb between us and the end finish of the ride, it seemed like an easy 200-plus miles to the finish.

Right. The same wind that pushed us up the Feather River Canyon two days before, was still there to make sure we had to pedal downhill to the control in Tobin (which marked the end of the 1000K brevet). The wind did let up a bit for the last 200K, though, with Jarbo Gap seeming like nothing at all, as the realization that the flatlands were only a few miles away kicked in. Our group coasted into Oroville, at the head of the canyon, just as the sun set.

Of course, those last 80-odd miles back to Davis, in the dark, seemed to take much too long, but isn't that the mark of a 1200K? Time becomes elastic. Distances become deceptive. We stayed together, though, and talked ourselves through the darkest hours of the morning until we reached a secret control about 30 miles from the finish. I think their biggest secret was the recipe for their peach cobbler. A catnap on a cot (too tired to notice the delta mosquitoes), and I was ready to race the sun to the finish line. I'd have to call it a dead heat, as we finished exactly at sunrise.

Afterward, I felt more emotional than after completing PBP, perhaps because I was so proud of my fellow randonneurs and of the Davis Bike Club that had staged this smaller, more intimate randonnée so perfectly. Or maybe I was just more tired. The first Gold Rush was over. But I'm sure it won't be the last. I may even be back in four years, heat acclimated and ready to climb.