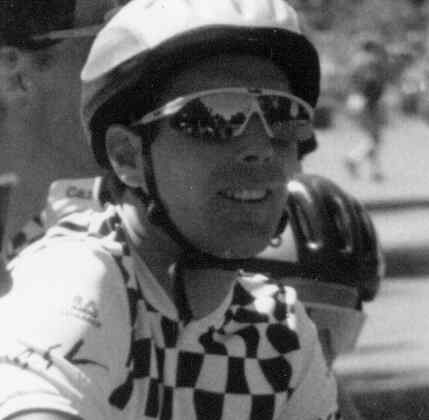 I began cycling as a teenager; mostly exploring the back roads of the Santa Cruz Mountains on weekends with friends. Moved to Davis in 1980 and became involved in Davis Bike Club activities, such as the Davis Double Century. Mostly bike raced between 1988 and 1994, but also rode brevets and PBP's during this time. My ultracycling interest was primarily nurtured by our annual Davis Double Century and the beginning of brevet qualifiers for the 1987 PBP. I got started in randonneuring through the constant prodding of a cycling buddy, Larry Burdick, to go ride PBP in 1987. He convinced me to participate in the brevet series the club was putting on for the first time in 1987. I've been an avid randonneur rider ever since.

My most memorable cycling experiences were from past PBP's. These include: 1) Starting the 1987 PBP with a 1000 francs in my pocket and only a minimal understanding of where I was riding (just follow the arrows!); 2) Finishing the last 50 miles of the 1987 PBP under the power of only one good leg, through the middle of the night, in periodic heavy rain. I rode that last 50 miles in pain at a snails' pace, but by gum, I was going to finish this ride!; 3) For the 1999 PBP, being detoured by phony PBP officials for an extra 10 kilometers of riding simply because I had the luck of being in the same group as Scott Dickson at the time. While I didn't care to do the extra kilometers, I did get to witness the infamous event that changed the outcome of who finished first that year.

My inspiration for organizing brevets and other Davis Bike Club functions comes from Gerry Peterson, the first Davis RBA. Gerry introduced randonneuring to many Northern California cyclists ready for bigger challenges and did an excellent job putting on brevets for many years. When Gerry left the position in 1996, I took up the reigns as brevet administrator. It has been a lot of hard work but also a rewarding experience.

I have been involved in organizing or supporting other cycling events as well, such as the Davis Double Century, for the last 10 years. California also has a number of other excellent double centuries throughout the State, and I participate in several of them every year.

I have ridden the Davis brevet series prior to every PBP and BMB I have participated in (1987, 1991, 1995, 1997, 1999). So far, I'm 4 for 4 on PBP's. Each PBP I have ridden was an exciting challenge and a great vacation. But in a few words each PBP can be described like this:
1987 - Cool, periodic rain, absolutely pitch black at night due to cloud cover (lesson learned: get a better lighting system). Started with the 90-hour group at 4 AM (Ugh! This was too early a start).
1991 - Hot and windy. 375 miles of tailwinds on the way out, 375 miles of headwinds on the way back. At least the tailwinds were fun. The full moon was so bright at night that a headlight was not really needed! Started with the 84-hour group at 5 AM (still feels too early because it was recommended you get up 2 hours before the start).
1995 - Almost perfect weather, but also the year of many wrong turns for me. I can say without hesitation that it is a drag to get lost for an hour when you're only 30 miles from the finish. Started with the 80-hour group at 10 pm and had partial crew support out to Carhaix.
1999 - Wonderful weather again, like in 1995, but a little warmer. Didn't really get lost this year but seemed to do just as many 'bonus' miles (20-30 miles) as in 1995. Started with the 80-hour group and had full crew support. Lasted with the main 'racing' group until the hills out of Loudeac, where Scott Dickson upped the pace and I promptly blew to pieces.

There are four reasons that make the Davis series distinctive, these are:

1) The cyclists (or randonneurs). We have a huge base of enthusiastic cyclists who love randonneur-type events. Their enthusiasm naturally permeates to other new riders to generate an even larger base of long-distance fanatics. During PBP years, we get anywhere from a high of 120 riders for the 200k brevet, to a low of 60 riders for the 600 k brevet. In off-PBP years, we have anywhere 90 to 20 riders, depending on the distance. The 1000k brevets typically have 15 or less. Because of the large rider base, the DBC Brevet series is relatively cheap for what you get. For 2001:
$20.00 - 200 km brevet
$25.00 - 300 km brevet
$35.00 - 400 km brevet
$45.00 - 600 km brevet
Davis Bike Club members get a $5.00 discount per brevet. This helps encourage club membership (and certainly helped make the DBC the largest foreign club at the 1995 and 1999 PBP). Most brevets include certain services not normally provided at most other brevets, including food at controls, bag drop services to designated locations, and spaces to sleep at controls of longer brevets.

2) The volunteers and DBC brevet approach. Having randonneurring as part of a popular bike club gives us a very large base of enthusiastic volunteers to help run brevets. This way, we can man all controls, have food /water support at controls, have course monitors keeping track of all riders, have marked courses to help with route finding, and provide for a round-the-clock finish support crew to greet riders as they finish. We also send all riders maps, cue sheets, and brevet information before the brevet so cyclists can come prepared. Our aim is to provide services for the Brevet series similar to that found at 1200 km brevets such as PBP and BMB. Any money leftover after the series is over is used to throw a dinner party and awards presentation for the volunteers, and to support cyclists in other brevet endeavors (such as PBP).

3) The countryside. Great cycling area! A brevet route scouters dream! I can choose from extremely flat agricultural terrain that goes for 100's of kilometers, to challenging wine country hill climbs for 100's of kilometers. Extreme examples include: Bill Bryant's Flatlander Fiesta 200k brevet route (less than 500 feet total elevation gain) and our Atlas Peak 200k brevet (with over 7000 feet of elevation gain). You get all of this along with lightly traveled roads, great scenery, few stop signs, and wonderful weather (generally 70s and 80s from March thru May).

4) The Davis Double Century and high visibility of the club among cyclists. The DBC is known throughout California as the club that puts on one of the most popular Double Centuries for new and experienced double century riders. Thus, the DBC already has a built-in base of long-distance cyclists ready for new challenges. The many cyclists who access applications and information for the double century from the DBC website will come across applications and information on brevets and randonneuring. This is the intended target audience...new and experienced long distance cyclists!

Even though California is generally a great place to ride a bike, we do have some particular problems in our region that we try to work around when putting on brevets. These include:

1) Summer heat (but its a dry heat!). Most of the brevets are held in March and April, when temperatures are moderate and most conducive for long cycling events. Typically, one brevet in the series will have wind and/or rain, but the remainder will have nice weather. However, temps can easily reach 100+ degrees by late May. We run most brevets in the first half of the year when the weather is nice. For summer brevets in potentially hot conditions, we usually start the brevet in the evening and head the randonneurs into the mountains to get them out of the Central Valley heat. Or, head them off towards the ocean where temps are usually moderate year-around.

2) Boaters and other unfriendly motorized morons. We have a popular reservoir nearby that attracts boaters and their assorted beer-chugging hangers-on. Boat-pulling motorists and cyclists just don't mix. On top of this, the cops in these areas always assume bikes are the problem! We try to use roads near these areas prior to peak boating season, and only during off-hours during the peak boating season. In addition, it helps to know the cycling terrain and road system very well. We try to avoid busy roads, or only use them for brevets if wide shoulders are present. Rough roads are used mainly during daylight hours to help avoid nighttime encounters with potholes.

Exciting trends that I have seen in our region over the last 15 years of randonneuring include:

Improved lighting systems. The use of the Schmidt hub was a biggee in the last 2 years. However, the speedy riders have gravitated mainly to Cateye Micros using AA lithium batteries. All rear taillights are diodes now, but lightbulbs in rear taillights were practically obsolete by the time the 1995 PBP rolled around.

Wheel sets. More and more randonneurs are moving towards light-weight, aerodynamic (and expensive) wheel sets. As the technology advances in this area, randonneurs around these parts are right on the cutting edge!

Rather than be reactive (like many politicians), the DBC tries to be proactive, at least with regard to safety issues. We now require reflective leg bands on both legs and solid rear taillights (no strobe) for night-time hours during a brevet, in addition to the usual reflective gear. The rear taillight can only be turned to blinking mode to alert course monitors that a rider needs help. Our primary course monitor, Lee Mitchell, has spent many hours following cyclists at night... leg bands are one of the easiest places to see reflectors, and red strobe lights are annoying.