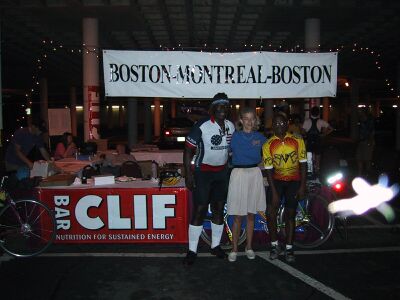 Ever since I successfully completed the Paris­Brest­Paris (P­B­P) 1200k in 1991, members of the randonneur community have encouraged me to do the Boston­Montreal­Boston (B­M­B) 1200k, the American equivalent of P­B­P.

My BMB ambition started years ago but, back surgery in 1993, law school from 1993 to 1996, law firm work totaling 60­80 hours per week, more back surgery in 1999, kept me from doing the preparation necessary to qualify and prepare for BMB. In January 2001, I made the BMB commitment despite being 55 lbs. heavier and 10 years older.

My nephew, Turbo Flores is 14 years old. He qualifies as a veteran cyclist, because he started riding with me when he was five years old. He rode with a kiddy stoker, on the back of the tandem until he was nine years old when he graduated to a single bike and started riding on his own. His talent and ability have grown each year. It was pretty clear that 2001 was the year that he would exceed his uncle in speed, stamina and climbing. At any rate I love riding bikes and my lack of talent has failed to keep me from doing whatever was within my capability and sometimes beyond. Turbo has hung with me from the very first time I took him on a 50­mile ride to teach him a lesson for bugging me. At the end of the ride, he wouldn't get off the tandem because he wanted to ride some more. That too was 10 years ago.

In March that Turbo and I started riding. We joined the Ohio branch of the Randonneurs USA and rode the 200k Brevet in was late April. At the start of the 200K it was raining, but the rain was predicted to stop in the next hour, so when all the other riders started, Turbo and I waited for the rain to stop. We started an hour and 15 minutes after the group, promptly got off the course, got lost trying to find the route, and missed qualifying. The following week we went to Kentucky and did qualify. The 300K was late May, this time we utilized every minute available of the 20 hours allowed to complete the 186 miles, and it was uneventful. Early June was the 400K. David Buzzee put the Ohio routes together David did a superior job putting together routes that would prepare OR riders for BMB, but Turbo and I were not prepared for some of the steep, long assents. The intensity shocked both Turbo and I. Not only had Turbo never ridden a bike all night, he had never even stayed up all night, ever. When we got back to the checkpoint where our motel room was, Turbo went to bed and wouldn't get up. I left him asleep and headed out to the finish, but it was not the same without him and the energy we shared riding together. He completed 194 miles and I completed 218 miles of the 248 mile course. When Turbo woke­up, he got my "We Can't Be Quitters and Do This" lecture. It was the same lecture I was to hear from him, at my lowest point during the Quads.

After the 400K we had our gearing adjusted to triples with mine a 22X36 and Turbo's a 26X34. Our equipment and our mental and physical preparation was appropriate for the 600k. The 375­mile ride has a 40 hour time limit miles. We were right on schedule at 300 miles when it started to rain. We rode in the rain for 23 miles until we started to get pelted with hail stones. It was really funny because we were riding for a while past cars that had pulled to the side and couldn't drive. Eventually we took cover in a vacant house where we stayed for an hour and a half. I got hypothermia, and couldn't stop shaking. We bailed out at 323 miles.

Fortunately BMB has an alternative event for those who don't qualify for the 1200k Randonnée. It is the Quad Centuries. The Quads are the toughest part of the BMB event, and totals 460 miles. Riders follow the BMB route for 100+ miles for four consecutive days. Just as with BMB, Quads riders must be committed to do the whole 460 miles because there is no other way back. The organizers made it clear that if a rider quits, that rider must find his own way back. There is no sag vehicle.

The Quads, is a ride like no other. From the very first peddle stroke we were climbing. Then more climbing and more climbing. It was relentless. No reprieves, no breaks no part of the course flat or easy to climb. I was really glad I'd lost 40 lbs (to 230) but, wished I'd dropped more. The constant barrage of tough climbs and the continuous intense demand, wore me down psychologically and physically. We were in breathtaking country, and even with the demands of the ride were able to stop on several occasions just to take in the awesome beauty and majestic mountains, valleys and waterways. It really confirms the existence of God.

The BMB Quads course was way more difficult than I could have ever imagined. Buzzee had put together what I thought to be outrageously tough brevets, which do not seem at all out of norm now. I do remember Buzzee telling me that BMB was tougher than PBP and that the preparation had to be tough as well, but you just can't TELL anyone about an experience like BMB and be in any ways confident that they'll understand the magnitude of the "warning."

Half way through the first day of constant climbing with no reprieve, I was having serious doubts that I could do it. Hour after hour I kept thinking it had to get easier, but when I went round that next bend or go over the next rise, I only found more climbing. Turbo and I have agreed on one firm rule: no whining, either be quiet or fix the problem. I'd been completely silent and Turbo had ridden with me enough to know that I was in trouble. He and I stopped to rest and I just sat unresponsive for a period a lot longer than normal. Turbo reminded me of something I had told him at the 400K when he need to be encouraged. He said "...as long as you can turn one peddle stroke, quitting is a choice and you are not a quitter." After that (and with watery eyes) I concentrated on making the next turn of the crank. I couldn't bear looking at the continuously rising landscape or, how around every turn, there was another rise, even steeper than the rise I was on . So, I just put my head down and looked at my feet turning the 22X36 inch gear at sometimes no more than 40 rpm.

At the summit of each climb I was energized at having done it, each climb an individual victory, each an inspiration to do the next climb. I prayed for relief from the discomfort and strength for the next turn of the crank arms. When I call this a spiritual experience, this is what I mean. It is almost like a level of conscientiousness which is only apparent when faced with overwhelming obstacles or challenges, alters my mental state. This altered state plugs into an unconsciousness awareness where lies unlimited courage, strength, faith, determination---a spiritual existence that transcends physical limitations. I got to look at my own soul. This kind of survival effort provides a forum through which faith in spiritual power is tested and becomes real. That is an amazing thing and worth the time, effort, preparation and sacrifices. Many of different religions, as part of their orthodox practices, make a once­in­a­lifetime pilgrimage, to seek this kind spiritual confirmation. I'm really grateful to have had such an opportunity. In the end, it was not just a bicycle ride, it was a test of faith, a test of determination, a test of courage. After four days of dawn til dusk effort, we rolled into the finish. We were the last finishers, but finishers. It was a great victory.

So what does it mean when a bicycle ride turns into a spiritual adventure? It means I don't have to travel to Mecca to find spiritual confirmation. It also explains why I engage in an activity that is clearly beyond being classified as a "fun" activity. To some, I'm sure it sees unusual to think of a bicycle ride in terms of Divine intervention. Maybe my focus is because of my cancer diagnosis a year and a half ago. I've been on chemotherapy for that year and a half. The chemo has been successful at arresting the spread and shrinking the area where it does exist. I was scheduled for radiation treatments at the same time as BMB. My doctor advised that there is a 95% chance of complete cure, whether the radiation treatments occurred in August or later after the 2001 riding season winds down. I have a disease that could easily be terminal, so I'm more than lucky that it can be overcome. I'm blessed. The chemo drugs likely contributed to my lack of stamina, but there was also a contribution to my spiritual awareness and dependence. Whatever happens in the future, I'll face it with greater faith, courage, determination and spiritual dependence, because of having done the Quad Centuries.

There was also a right of passage for Turbo. On at least a dozen different occasions, I took so long to reach the summit that Turbo came back down and went back up again. There were a number of times when he was out of the saddle climbing for 40 minutes straight. It took me two hours to climb though the infamous Middlebury Gap. This is a 7­mile stretch characterized by a 12% grade and increasing steepness as you approach the summit. Turbo had to the top, then returned to check on me, had to repeat the toughest 1/3 of the climb. At least a dozen times he went up, came down and then went back up again. Since he was riding so strongly, and I was in trouble nearly the whole way, at the halfway mark we put all our spare parts, tools and food and warm cloths in his pack and I left my pack with a BMB volunteer. Turbo was still able to pull into the headwinds for 40 of the last 50 miles. He has potential.